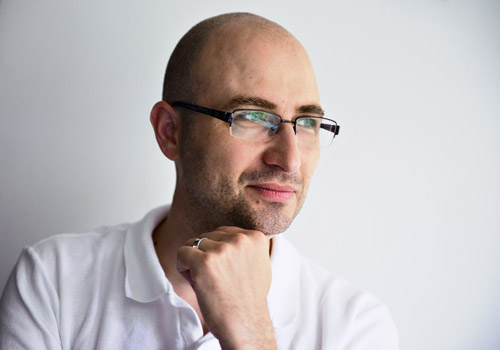 Born in 1977, Anton Terziev has graduated 2004 in Ceramics from the National Academy of Arts, Sofia. He works with painting and objects, as well as in the field of performance. Part of his activities is associated with various actions in the public space. Part of his interests are connected to literature – he has published 5 books of modern poetry and urban novels.

Based in Sofia, Bulgaria, he works with various subjects of the day often with the means of sharp irony. The artist's iconography possess harsh and critical imagery associated with a specific aestethisation of pain that is a common metaphor of governing power relationships in society, violence and hurting in the very political existence of man. A unifying thread in his works appears in the futile attempt of invention of objects and tools for survival in modern life`s contradictions, and burdens. His interventions in public space as a performer and actionist introduce a provocative and foreign for the local scene format.